There is a lot of confusion, and that is because it is confusing. Often generated by political and historic divides. Some people refer to the UK as the (dis)United Kingdom.

Since 1927, the United Kingdom of Great Britain and Northern Ireland is the constitutional monarchy occupying the island of Great Britain, the small nearby islands (but not the Isle of Man or the Channel Islands), and the north-eastern part of the island of Ireland. Usually, it is shortened to the United Kingdom or the UK, though Britain is also an officially recognised short form.

"Great Britain" (often abbreviated to GB) is sometimes used as a short form, and is the name used by the UK in some international organisations. GB is frequently used for the United Kingdom of Great Britain and Northern Ireland in international agreements, as well as in the ISO 3166 country codes. You will also see GB stickers on the back of cars registered in the UK.

In the past "England" was often used to refer to the whole of the United Kingdom, but this is no longer deemed acceptable. Between 1746 and 1967 the term "England" legally included Wales.

England and Wales, Scotland, and Northern Ireland are legal jurisdictions within the United Kingdom.

Great Britain refers to the countries of England, Wales and Scotland.

Politically, the British Isles consists of the United Kingdom, the Channel Islands (Jersey and Guernsey) and the Isle of Man. The Channel Islands and the Isle of Man have retained the British monarch as head of state. However, geographically the British Isles may also refer to the group of islands off the north-western coast of continental Europe, which consist of the islands of Great Britain, and include Ireland and over six thousand smaller isles.

Northern Ireland is that part of the island of Ireland northeast of the line of partition of 1922, and which is still part of the United Kingdom. 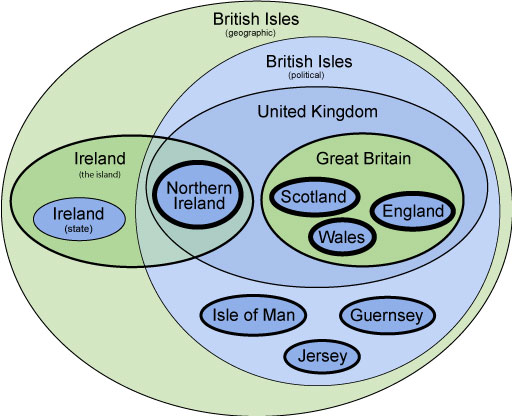 In sport it gets even more complicated. National representation varies from sport to sport. England, Scotland and Wales often compete separately as nations. In some sports; rugby, cricket etc., the island of Ireland competes as a nation; in others, most notably association football, Northern Ireland and the Republic of Ireland field separate teams. In these contexts England, Scotland, Wales and Ireland/Northern Ireland are sometimes described as the home nations.

Rugby union players from both Ireland and Great Britain play for British and Irish Lions representing the four "Home Unions" of England, Ireland, Scotland and Wales.

In the majority of individual sports (e.g. tennis and athletics), at international level competitors are identified as GB if they are from Great Britain or Northern Ireland.

When we talk about ourselves we usually refer to the country within the UK in which we were born. However, the word "British" is also an adjective and demonym referring to the United Kingdom. For example, a citizen of the UK is called a British citizen. For citizenship purposes "British" includes the Channel Islands and the Isle of Man. People born in the UK sometimes call themselves English, in Scotland Scottish, and in Wales Welsh. People born in Northern Ireland either refer to themselves as English or Irish.

Anglo- is often used as an adjectival prefix referring to the United Kingdom (notwithstanding that its original meaning is "English") particularly in the field of diplomatic relations. It can also refer to the English language, to anglophone peoples and can have a variety of other shades of meaning.

Wales is sometimes called the Principality of Wales, although this has no modern constitutional basis.

Northern Ireland is often referred to as a province or called Ulster, after the traditional Irish province of Ulster in which it is located.

The United Kingdom = Great Britain and Northern Ireland. It is a constitutional monarchy, the present sovereign is Queen Elizabeth II, she has no real political power and must defer to parliament.
Great Britain (Britain) refers to England, Scotland and Wales.
The UK is governed by the Cabinet ( 20 leading ministers + the Prime Minister). The supreme legislative body is the Parliament, this is split into two houses - The lower house is The House of Commons – 5 years (elected). The Upper house is The House of Lords which currently has hereditiary and life peerage members, although this is under review.
There is no codified constitution in the UK (common law, court judgements, conventions, and acts of Parliament) More Information
There are 3 main parties – Conservative (Tories) (right wing), Labour (left wing) and the Liberal Democrats (middle of the road).

Capital - Cardiff
Geography - West, mountains and moorland
Size - 21,588 sq km
Climate - rainy
Industry – tourism, mining, manufacturing
Other - The oldest son of the English Monarch is given the title “Prince of Wales”. In 1999 Wales was granted devolution, this allows them to have their own elected parliament.

A quiz on Wales

Capital - Edinburgh
Geography - North, hills, lakes (lochs – Lochness: where the mythical monster lives), mountains
Size - 80 234 sq km
Climate - cold and windy
Industry - tourism, oil, shipbuilding
Other - The Scotttish have their own traditions & way of life, they are very independent and have a special folklore and dress - kilts. In 1999 Scotland was granted devolution, this allows them to have their own elected parliament.

!Note - On Thursday 18 September 2014, a referendum was held to decide whether Scotland should be an independent country. They voted to remain, but I'm not sure what we will do with this page if they ever leave.

Now test your knowledge and learn a bit more about the geography of the UK here.

The first inhabitants; the Celts, came from North Europe before 6th century B. C.

1558 - The reign of Elisabeth I began. – England became a world power
1588 - British defeated the Spanish Armada. British colonization began with Virginia colonies.
1603 - Death of Elizabeth I

The Georgians (The house of Hannover)

For a chronological (802 - the present day) guide to the Kings and Queens of England and the UK see here.