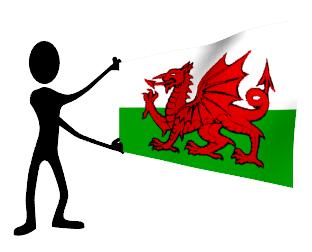 They probably have the coolest flag in the world. Come on! It's got a bloody dragon on it!

Wales is one of the four constituent nations of the United Kingdom. It's very small, the entire area of Wales is only 20,779 km2 (8,023 square miles). It is about 274 km (170 miles) long and 97 km (60 miles) wide, but it has over 965 km (600 miles) of largely unspoilt coastline. Located in the south-west of Great Britain it is bordered by the English counties of Cheshire, Shropshire, Herefordshire, and Gloucestershire to the east, the Bristol Channel to the south, St George's Channel to the southwest, and the Irish Sea to the west and north.

The modern border between Wales and England is highly arbitrary; it was largely defined in the 16th century, based on medieval feudal boundaries. It has apparently never been confirmed by referendum or reviewed by any Boundary Commission (except to confirm Monmouthshire as part of Wales in 1968). The boundary line (which very roughly follows Offa's Dyke) separates Knighton from its railway station, virtually cuts off Church Stoke from the rest of Wales, and slices straight through the village of Llanymynech (where a pub actually straddles the line).

Wales is steeped in history, it wasn't always a part of Great Britain and has very strong Celtic roots. Between the 9th and 11th centuries it was divided into small states, but in the 13th century Llewelyn ap Iorwerth united the country and his son was crowned the first Prince of Wales, this state ended very quickly in 1282, when Edward I of England conquered Wales and gave the title of Prince of Wales to his son, Edward. Ever since the eldest son of the King or Queen of England has been given this title, the current Prince of Wales is of course Prince Charles.

All over Wales there are magnificent stone castles and ruins from this time. Built by the English to control the Welsh, the best known are at Beaumaris, Caernarfon, Conwy, and Harlech.

Today Wales has an assembly and runs many of its own affairs.

Wales is officially bilingual; the official languages being English and Welsh. Welsh is taught as either the first or second language in all schools.

If you visit Wales you will see dual language signs on all the roads, and the Welsh language is recognised as a minority language by the EU, which means it receives grants to preserve it. There are numerous Welsh broadcasts and the BBC has a TV channel and a website in Welsh.

The Seven Wonders of Wales is a traditional list of seven geographic and cultural landmarks in Wales: Snowdon (the highest mountain), the Gresford bells (the peal of bells in the medieval church of All Saints at Gresford), the Llangollen bridge (built in 1347 over the River Dee), St Winefride's Well (a pilgrimage site at Holywell in Flintshire) the Wrexham steeple (16th century tower of St. Giles Church in Wrexham), the Overton yew trees (ancient yew trees in the churchyard of St Mary's at Overton-on-Dee) and Pistyll Rhaeadr (Wales's tallest waterfall, at 240 ft or 75 m). The wonders are part of the traditional rhyme:

Wales is famous for its mountains and hills and its beautiful coastline. Visitors can go cycling, mountain biking, walking, hiking, pony-trekking or canoeing.

Along the coast there are many sandy beaches and places for water sports such as sailing, windsurfing and surfing.

Rugby is the national sport in Wales. Often described as American football without all the padding. Going to a national rugby match is an unforgettable experience.

Another thing Wales is famous for is singing. It is often known by the phrase "the Land of Song" (Welsh: Gwlad y Gân) and its people have a renowned affinity for poetry and music. Famous singers from Wales include Sir Harry Secombe, Bryn Terfyl and Shirley Bassey. Every year Wales hosts the Internation Music Esiteddfod.

Test your knowledge of Wales.