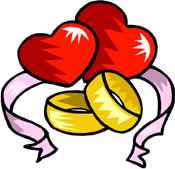 The origins of Valentine's Day

One story of the origins of Valentines Day comes from the time of the Roman Empire, under the rule of Emperor Claudius the Second. Rome was involved in many bloody and unpopular military campaigns. Claudius the Cruel, as he was known at the time, was having a difficult time getting soldiers to join his military leagues. He believed that Roman men did not want to leave their lovers or families. As a result, he cancelled all marriages and engagements in Rome.

During this time a Christian priest named Valentine came to defend love in the empire. Valentine began to secretly marry couples despite the emperors orders. When Emperor Claudius was informed of these ceremonies, Valentine was sent to prison where he remained until his death on February 14 in the year 270.

The festival is like Christmas a combination of both pagan ritual and a Christian tradition. Another, more gruesome, story of its origins is that St. Valentine helped Christians flee the city of Rome during the persecutions, he was tortured to make him renounce his faith and clubbed to death, then beheaded (which seems a bit of overkill) on February 14 AD 273.

It is also linked to the pagan festival of Lupercalia, which was celebrated on February 15 by young Romans centuries before Christ. The celebration was held in honour of the goddess Februata Juno, and concerned all young people of marriageable age. The names or tokens representing all the young girls in the district were placed in a love urn and the young lads each drew a token and the couples paired off. This was a kind of mating lottery game. During the Roman occupation of Britain, the idea was brought to this country and adopted by the ancient Britons. When people were converted to Christianity the pagan and Christian festivals were merged; the festival of Lupercalia was put back a day and celebrated on St. Valentine's day, February 14. The old pagan customs still continued and in Britain up to the beginning of the present century it was customary for local lads and lasses to draw lots for partners. In Lancashire, on St. Valentine's eve, the names of eligible young people were written on separate slips of paper and divided into two groups, male and female. The boys drew a slip from the girls' pile and vice versa. Thus each person received two sweethearts and then had to work out for themselves the most satisfactory arrangement. After the final selection had been made the boys treated their maidens to all sorts of outings and surprises including dances and gifts.

In Saxon England and after, on St. Valentine's day it was customary for a boy to give the girl of his choice a love token, usually a pair of gloves. The glove was a sign of authority in olden times. In Norwich, years ago, it was the general custom to give presents on St. Valentine's eve and packages containing all kinds of gifts were laid on doorsteps all over the city. They were anonymous and usually just bore the message "a Good-morrow to you Valentine". It was normal practice to ring or knock on the door after depositing the package and then disappear. Some parcels contained valuable presents while others were given as a kind of joke, being wrapped in many layers of paper punctuated at intervals by little notes of encouragement such as "Never despair".

It was not until the 15thC that the first greeting card was produced because, until that time, parchment was scarce and the majority of people were illiterate. The forerunner of the paper Valentine was first seen in the 17th C and the first printed Valentine may have been the title page of a book of verses published in 1669 entitled A Valentine Writer. With the introduction of the penny postage and the use of envelopes in 1840 the popularity of the Valentine card increased. The Valentine card took on a much more delicate form in Victorian times. It was often made out of lace paper, velvet and satin ribbons, embossed with the best quality material. These cards often had trick or secret panels in them, hiding secret messages to the girls concerned. Messages were also often hidden under folds of lace or ribbons. This was because Victorian fathers were very strict and would not allow their daughters to receive any sort of correspondence unless they had first read it and decided whether or not it was suitable. Later the traditional card printed its love messages in the form of a verse similar to those repeated by people centuries before.

In 1872 the Post Office declared that parcels not exceeding 12 ounces in weight could be sent by letter post. This news meant that in Norwich alone two days before St. Valentine's eve 150,000 letters containing small gifts were sent through the post. From that time, the custom of leaving presents on doorsteps decreased in importance. However, giving Valentine presents in Norwich continued through the purchase of gifts for the office, domestic and personal use. Local papers advertised, wall placards advertised and the town criers, too, advertised by ringing bells and shouting the advantages of buying gifts at certain local stores. The presents sent in a secret manner included oranges, work boxes, squeaking dolls, silver pencils and holders, books and various trinkets. In other parts of Britain, presents were also distributed: in Peterborough, sweet plum buns called Valentine Buns were made and eaten; in Uppingham, gingerbread was given to lovers; in Rutland, buns shaped like a weaver's shuttle and called a Plum Shuttles' were made and are still being made for children on this day. Weaving and lace-making were cottage industries in that area. The aristocracy, in the 17th C, often drew names for Valentines and the pairing lasted until the next Valentine day. Gifts were expected by the ladies and often expensive gifts such as silk stockings, garters, jewelry and perfume were given.

The censorship of strict Victorian fathers and the element of mystery and surprise experienced by those who in former times played the lottery pairing game has undoubtedly contributed to the reason why Valentine cards are, by tradition, anonymous. The custom of sending Valentine cards almost came to an end in the early part of the present century. However, in the thirties it was revived and has now been highly commercialised. The early hand engraved and painted Valentine cards are collector's items and are often displayed in libraries and museums during the season of Valentine's Day.

Gifts have always been a traditional aspect of the lovers' holiday. As a tradition in Wales, wooden love spoons are carved and given as gifts. Hearts, keys and keyholes are favorite decorations on the spoons, meaning "You unlock my heart."

Today Valentine's cards are sent anonymously by a 'secret admirer', a common practice is to put a personal message in the local or national newspapers.

Flowers are the most common gift given, a dozen red roses or (more romantically and cheaper) just one red rose. Allegedly it was Charles II of Sweden, in the 18th century, who introduced the idea of flowers symbolizing emotions, and the red rose was singled out for love. The number of roses has significance too:-

Today, red roses stand for passionate love, pink roses for friendship, white for purity, and both red and white mean unity, or if you are a certain nurse in Shropshire "blood and bandages". Oh and make sure your red rose is a nice bright red, dark red roses are a symbol of death.

It is just as common for a woman to send a man a message of undying love, especially during a leap year, and on Valentine's Day in a leap year it is the custom for women to ask their boyfriend or partner to marry them! So watch out!

Several Valentine's Day superstitions have even made their way into our modern-day vocabularies. For example, in the Middle Ages, young men and women drew names from a bowl to see who their valentines would be. They would wear these names on their sleeves for one week, and "to wear your heart on your sleeve" now means that it is easy for other people to know how you are feeling.

Other Valentine's Day superstitions revolve around predicting who you're going to marry. Some people used to believe that the first bird a single woman saw on Valentine's Day would give her an indication of the kind of man she'd marry. If a woman saw a robin flying overhead on Valentine's Day, it meant she would marry a sailor. If she saw a sparrow, she would marry a poor man and be very happy. And if she witnessed a goldfinch flying above, she would marry a millionaire. I dread to think what it would mean if you saw a vulture, luckily they're not common round these parts. These superstitions probably come from the belief that birds, particularly lovebirds, began to mate on February 14th.

Although not directly related to Valentine's Day, similar modern-day superstitions deal with love and predicting future marriage partners. According to tradition, thinking of five or six names of boys or girls one may like to marry and twisting the stem of an apple until it falls off will reveal a future spouse. The person whose name was being said when the stem fell off is the future winner of a set of marriage vows. The number of children a person will have can also be superstitiously predicted by blowing the seeds of a dandelion into the wind. The number of seeds remaining on the stem reveal the number of children the person will have.

Valentine's Day has become a popular celebration in many parts of the world. I mean, who wouldn't want to celebrate love and marriage? Unfortunately not everyone is happy about this. Every year the fun police in many parts of the world issue warnings and edicts to young people who wish to celebrate this "Pagan Christian ritual". Thank goodness my vicar never warned me against the sins of celebrating Diwali, the Chinese New Year or Eid. Just remember, keep safe, and you can celebrate it in your heart.

If all this talk of romance has inspired you to write your own love sonnet, you can send your sweetheart a Valentine's Day card using one of the many free card services out there.