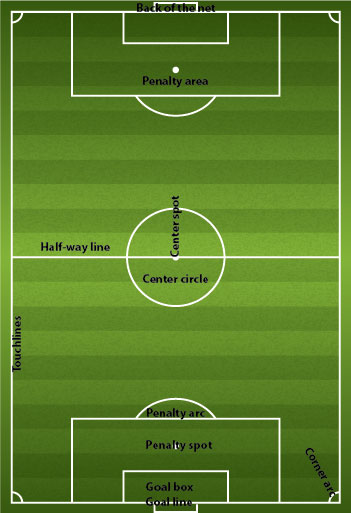 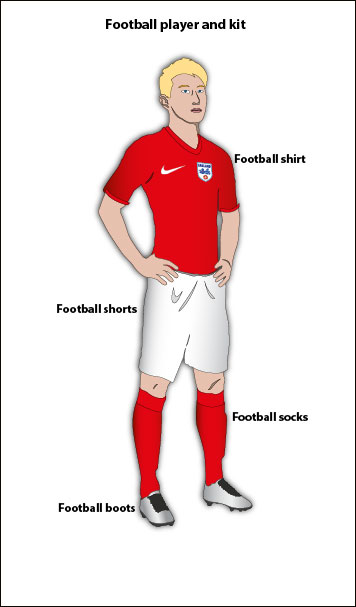 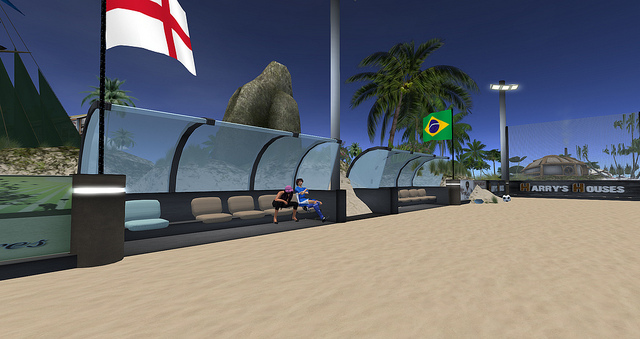 The manager and the coach sit in the dugout with any substitute players. 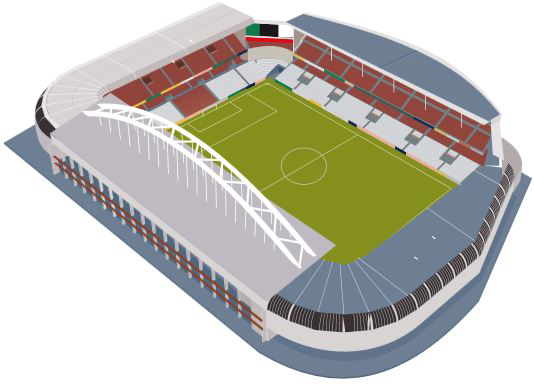 Football matches are played at football grounds and stadiums.

In 2014 the World Cup was in Brazil. Who did you support?

How do you play football?

The aim of the game is to score the most goals by the end of a game (match).

There are two goals at each end of the pitch. A team scores a goal by getting the ball into the opponent's goal.

For an official game there are eleven players on each team. A goalkeeper and ten other players who take various positions on the pitch. In an international match there are also 3 possible substitutes. They sit in the dugout with the manager and the coach and only play if another player is injured, or if the coach decides to let them play.

Each team wears a kit (uniform), and each player has a number. Different teams have different colours (strips), there is one strip for a home match, and another for an away match.

The start of a football match is called the kick off.

The ball is kicked using the foot (hence the name football), and apart from the goalkeeper (goalie), players are not allowed to touch the ball with their hand or forearm when the ball is in play.

The match is played on a pitch, which is measured in yards.

The corners of the pitch are marked using corner flags.

The pitch includes a penalty area (18 yard box) and the six yard box.

There is a referee and two assistant referees (linesmen) who oversee the game, and enforces all the rules.

If the ball is kicked out of play the other team can take a corner kick, or a throw in depending on where the ball left the pitch.

A match last 90 minutes: two halves of 45 minutes each. At halftime the teams swap ends. Additional time can be added on to the end of the game.

If anyone breaks the rules, they can be punished, the referee might show a player a yellow card (a warning), issue a free shot, or a penalty to the other team, or for the worst offences a player may be sent off (shown a red card), leaving their team a player short.

If the game is a draw by the end, the result can be decided by playing extra time, until one of the teams scores - a golden goal (it used to be called sudden death).  If there are no goals after both periods of extra time, it goes to penalties in a shootout.

The offside rule is really complicated. These guys have made a good stab at explaining it:-

Explore more visuals like this one on the web's largest information design community - Visually.

Mr Smith is discussing the football with his wife.

Games and Tests for this Vocabulary Unit

All these games and tests open in a new window.