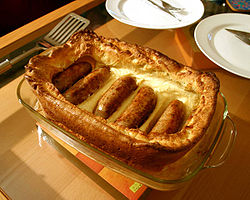 Toad in the hole is a traditional English dish consisting of sausages in a batter.

The origin of the name "Toad-in-the-Hole" is often disputed. Many suggestions are that the dish's resemblance to a toad sticking its head out of a hole provides the dish with its somewhat unusual name. An 1861 recipe by Charles Elme Francatelli does not mention sausages, instead including as an ingredient "6d. or 1s. worth of bits and pieces of any kind of meat, which are to be had cheapest at night when the day's sale is over." A wartime variation on the original used Spam instead of sausages.

To bake: To cook in an oven.

To beat: To thoroughly combine ingredients and incorporate air with a rapid, circular motion. This may be done with a wooden spoon, wire whisk, rotary eggbeater, electric mixer or food processor.

To mix: To beat or stir food ingredients together until they are combined.

To pour: To transfer a liquid from one container to another.

!Note - Not to be confused with Toads in a hole. 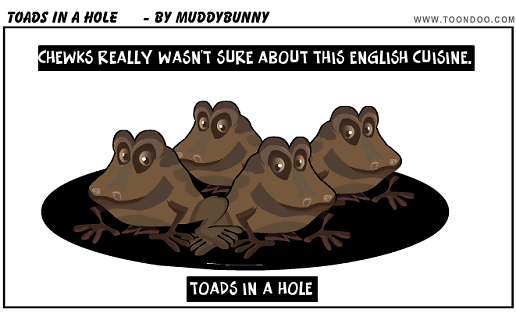