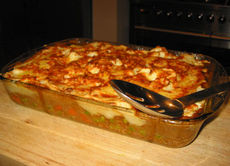 To boil: To cook in water at a temperature of at least 100°C.

To brown: To cook food until it has a brown-coloured appearance, in this case this is achieved by gently frying the meat.

To brush: To cover food with an even layer of liquid by applying it with a pastry brush, eg brush the pastry with beaten egg or milk to glaze.

To chop: To cut food into small even-sized pieces using a knife or food processor.

To drain: To remove water from ingredients cooked in liquid or from raw ingredients that have been washed in water by placing them in a sieve or colander.

To fry: To cook in hot fat.

To mash: To break down a cooked ingredient such as potatoes into a smooth mixture using a potato masher or fork

To peel: To remove the outer layer of a food.

To simmer: To keep a liquid just below boiling point, usually in a pan on the hob, e.g. simmer the sauce until it starts to thicken.

To skim: To remove a layer of scum or fat from the surface of a food.

To stir: To agitate an ingredient or a number of ingredients using a hand held tool such as a spoon.