What is well dressing?

Well, it's nothing to do with dressing well for a start. In this case the well in question is a deep hole in the ground from which water can be collected, and well dressing is a custom practised in the Peak District and other areas of England, in which wells are decorated with designs created from thousands of flower petals. 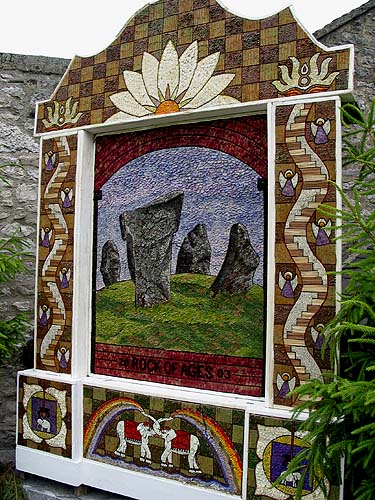 Thousands of flower petals make up each picture

The history of well dressing

The origins of the tradition are alternatively said to lie in pagan tradition or in giving thanks for the purity of the water drawn from certain wells during the period of the Black Death. It is often said to have originated in Tissington, Derbyshire.

The custom almost died out, but during the twentieth century, it was revived and has spread to numerous villages and small towns in Derbyshire, Staffordshire, South Yorkshire, Cheshire, and even as far afield as Much Wenlock in Shropshire.

The dressing of the well

Wooden frames are constructed and covered with clay, mixed with water and salt. A design is sketched on paper, often of a religious theme, and this is traced onto the clay. The picture is then filled in with natural materials, predominantly flower petals and mosses, but also beans, seeds and small cones.

Each group uses their own technique, with some areas mandating that only natural materials be used while others feel free to use modern materials to simplify production.