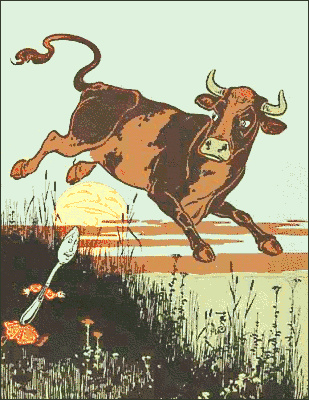 I can remember, as I’m sure many of you can, my mother singing me nursery rhymes, like ‘Hickory Dickory Dock’ and playing ‘Horsey Horsey’ with my father who would bounce me up and down in time to the rhythm. A great favourite when I was very small was ‘Hey Diddle Diddle’ with its impossible images, such as a cow jumping over the moon and a cat playing a fiddle.

Many English rhymes have some historical data in them, and so have some sense behind them, even if those who sing them have no idea of the origins.

For example, ‘Ring a Ring a Roses’ is a circle game often played by groups of small children.  It is great fun, especially when everyone has to fall down. It is based however upon the symptoms of the plague, the Black Death, which in the past travelled across England in regular attacks for many years . The ‘ring of roses’ refers to the red rashes. The posies were carried in order to ward off the disease and the smells.’ Atishoo!’ – refers to the sneezing which helped to spread the disease and the falling down describes how people would fall down dead.

‘London Bridge is falling down’  is another popular children's party game – almost a dance. The reference is to the frequency with which London Bridge has been replaced – the last time it was sold to America and a new one built, but that happened long after the song was written.

To those who perhaps don’t know, ‘Pop goes the Weasel’ is one of the hardest to interpret. It dates from the 17th century and is based upon Cockney slang. ‘Pop’ means to pop something into the pawn shop. So why weasel? Well weasel is short for ‘weasel and stoat’ – rhyming slang for coat. So the rhyme describes someone taking their coat to the pawn broker in order to get some money. The City Rd is just east of the city and the Eagle is a public house or tavern there. In other words the money obtained from the pawn broker was spent on drink.

Sometimes people get the meanings wrong. I was taught that ‘Mary, Mary, Quite Contrary’ referred to Queen Mary Tudor and her garden, but have recently heard that the gardens referred to the increasing size of graveyards at the time and the ‘cockle shells’ and ‘silver bells’ were polite names for the instruments of torture that were used during her reign. I thought the pretty maids were her ladies , but apparently refers to a rather  instrument of execution. I suppose people could sing the song if they disagreed with what was going on, but no one would know what they would be referring to.

What songs did you sing when you were very little? Are they different to the ones you sing to your children now? Did your nursery rhymes have hidden meanings as English ones do? Could you translate them into English or don’t they make sense if you do?  I would certainly find it hard to make sense in French or Urdu of ’Pop goes the weasel’.

Here are a few of the most popular children's nursery rhymes:-

Hey diddle diddle, the cat and the fiddle,
The cow jumped over the moon.
The little dog laughed to see such fun
And the dish ran away with the spoon!

London Bridge Is Falling Down

Up and down the City road,
In and out the Eagle,
That’s the way the money goes,
Pop! goes the weasel.

Mary Mary quite contrary,
How does your garden grow?
With silver bells and cockle shells,
And pretty maids all in a row.

You can read more silly rhymes and poems (traditional and modern) on the English Magazine.