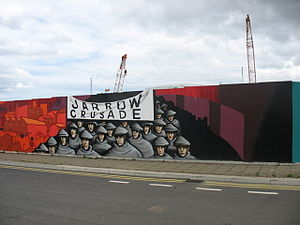 Jarrow is a town in Tyne and Wear, England, located on the River Tyne. It was established when the Angles re-occupied a 1st century Roman fort on the site of Jarrow in the 5th century. Its name is recorded around AD 750 as Gyruum, representing Old English Gyrwum = "the marsh dwellers", from Anglo-Saxon gyr = "mud", "marsh". Later spellings are Jaruum in 1158, and Jarwe in 1228. Today Jarrow residents' popular nickname for Jarrow is "Jarra".

It remained a small town until the introduction of heavy industries like coal mining and shipbuilding, in fact from the middle of the 19th century until 1935, Jarrow was a centre for shipbuilding. Charles Mark Palmer established a shipyard – Palmers Shipbuilding and Iron Company Limited – in 1852 and became the first armour-plate manufacturer in the world. John Bowes, the first iron screw collier, revived the Tyne coal trade, and Palmers was also responsible for the first modern cargo ship, as well as a number of notable warships. Around 1,000 ships were built at the yard.

Palmers employed around 80% of the town's working population until its closure in 1934 following its purchase by National Shipbuilders Securities Ltd. (NSS). This organisation had been set up by Stanley Baldwin's Conservative government in the 1920s. The aim of NSS was to reduce capacity within the British shipyards. In fact Palmer's yard was relatively efficient and modern, but allegedly had financial problems.

The closure of the shipyard was responsible for one of the events for which Jarrow is best known; the Jarrow crusades.

On October 5th 1936 the 200 men set off to London to deliver a petition to protest against unemployment in Britain, their MP, Ellen Wilkinson, known as 'Red Ellen', walked with them and wrote about these events in her book The Town That Was Murdered (1939). The total number of signatures on the petition was 12,000 and the marchers arrived in London on 31 October, almost a month after leaving their homes. The Prime Minister of the day, Stanley Baldwin, refused to see any of the marchers' representatives, claiming it would set a dangerous precedent.

Some doubt has been cast by historians as to how effective events such as the Jarrow March actually were, as when the marchers completed their feat, very little was done for them. The ship industries remained closed and all that they were given was £1 each to get the train back from London, but there is some evidence that they stimulated interest in regenerating 'distressed areas'.

This little known, but historic event still causes ripples. In 2008, Go North East made a tribute bus called the Crusader 27/27A to honour the marchers, and for the 75th anniversary in October 2011, Youth Fight for Jobs plan to recreate the march to highlight record levels of youth unemployment in the UK.

The route the marchers took was in 22 legs with overnight stops, covering a total of 280.5 miles (451 km) as follows: