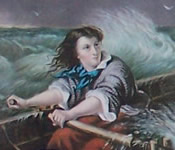 ’Help! Help!’ she could hear the cry of the shipwreck’d crew.
But Grace had an English heart,
And the raging storm she brav’d;
She pull’d away, mid the dashing spray,
And the crew she saved.

Grace Darling was born in 1815 at Bamburgh in Northumberland, and spent her youth in two lighthouses of which her father was the keeper. She became one of England's best-loved Victorian heroines.

In the early hours of September 7, 1838, Grace, looking from an upstairs window of her family's current lighthouse on the Farne Islands, spotted the ship, Forfarshire, which had run aground on the treacherous Harcar Rocks only a few hundreds yards away. Knowing that the weather was too rough for the lifeboat to put out from shore, Grace and her father took a rowing boat across to the other island and rescued nine frightened survivors, bringing them safely back to the lighthouse. Even in her lifetime, Grace's achievement was celebrated, and she received a large reward in addition to the praise of the nation.

She died of tuberculosis, in 1842, a spinster, but her memorial may be seen in the parish church at Bamburgh, close to a museum dedicated to her achievements and the seafaring life of the region. Her deed was committed to verse by Wordsworth and a lifeboat with her name was presented to Holy Island.

It is a common mistake to believe that Grace is buried under the memorial. She is in fact buried with her father and mother in a modest grave within the same churchyard.