Fashion, Clothes and National Costumes in the UK

One of the most famous national costumes in the world is that worn in Scotland, the kilt, however some people say that the kilt is not as traditional as some would have it. Be that as it may it is certainly what people associate with Scotland, along with whisky and haggis that is.

Some people consider it very bad luck to wear a kilt in a tartan that does not belong to your family.

Just to remind you should you visit Scotland any time - the men do not wear skirts - they wear kilts - and don't you forget it!

Today traditional dress for men in Scotland is a kilt with shirt, waistcoat and tweed jacket, stockings with garter flashes, brogue shoes and a sporran. A bonnet is often worn displaying the clan crest.

Traditionally ladies don't wear kilts, they do however wear dresses or pleated skirts in a tartan material. More often though they wear a light plaid or shawl of tartan material,

Do you want to know what a Scotsman wears under his kilt? - Click here if you dare!

For the ladies the typical Welsh costume consists of a hat, made of black felt, with a high crown and wide brim, which is worn over a lace cap. A red flannel shawl is worn over a crisp white blouse, and a full skirt made of wool with a black and white check pattern and a starched, white apron. Proper Welsh ladies always wore black woolen stockings and black shoes and carried a basket, made from willow withies.

Read more about the Welsh National costume at the Museum of Welsh Life - St Fagans. 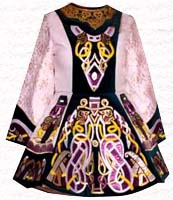 With the revival of Irish dancing, the traditional Irish costume has become associated with the bright flamboyant costumes worn by traditional Irish dancers. However in ancient Ireland people were more likely to be seen wearing 'leine' (Irish for shirt), trews (Irish for trousers) and long cloaks fastened with a brooch.

All in all there are a lot of myths and legends surrounding many of the so called 'traditional' costumes. Often when you do some real historical research you will find that they aren't that old or traditional.

Unfortunately the English don't really have a traditional National Dress as such. In one notorious episode during the Miss World pageant the English contestant came out wearing a Beefeater's costume, it was very embarrassing I can tell you.

There have been calls over the years to create a costume, but as usual no-one can decide on what it should look like. Even Henry VIII got in on the act and commissioned an artist called Van Dyck to create an English National Costume, this also failed. So for lack of anything else I will leave you with the following picture of the nearest thing - a Beefeater costume as worn by Miss England.

Dressing for the Occasion

When invited to a formal/business function there is nothing worse than discovering you've dressed incorrectly. If you receive an invitation that gives no indication of dress requirements, telephone your host and ask. The following will guide you on formal wear.

Play it safe. For the men colourful ties and cummerbunds are not businesslike. For the ladies low-cut, slinky, sexy dresses are not suitable for business functions.

Do you want to know more about British fashion? Here are some interesting fashion links:-

Two of the most famous (or infamous) designers in the UK are Zandra Rhodes and, slightly less controversial; Paul Smith, check out their web sites and see what you think.